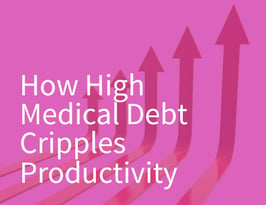 For a growing number of workers, high deductible health plans are the only option – a trend that started a decade ago.

The idea behind high-deductible plans was to make sure employees had “skin in the game.” If they had to open their wallets every time they visited a doctor, they would be more selective and less wasteful when using their medical benefits. These deductibles range from $5,000 to $6,000, and while monthly premiums typically go down, lower premiums also increase the risk of crippling medical debt.

With less waste, lower premiums, and increased profits, everyone should be happy, except patients now have a disincentive to see a physician. And worse, major medical events can become financially catastrophic – even with solid insurance.

Premature births with a NICU admission deliver the biggest financial blow from a high-deductible plan. The New York Times profiled Stacey Brown, mother of triplets, who was rushed to the hospital for an emergency C-section. The triplets’ care ultimately reached $4 million, leaving Stacey and her husband with thousands of dollars in out-of-pocket costs. With no paid maternity leave, Stacey had to leave her job because her pre-K teacher salary could not cover childcare costs. [1]

The March of Dimes estimates the average cost of a preterm birth at $65,000 (including medical, early intervention services, and lost productivity). [2] This dramatic cost grabs our attention, but less attention is placed on the impact on young families who are suddenly saddled with medical debt from co-payments and out-of-pocket deductibles. Even a standard normal birth can overwhelm a young person’s salary.

For women with employer-based health insurance, the average amount spent out of pocket for maternity care increased from $3,069 in 2008 to $4,569 in 2015, according to a study published in Health Affairs. [3] During this period, maternity care costs remained stable, which means patients are paying more out-of-pocket costs in the form of deductibles.

“Most of my patients don’t have $4,500 just waiting around,” Dr. Michelle H. Moniz, an OB/GYN at Von Voigtlander Women’s Hospital at the University of Michigan and the lead author of the study, told The New York Times. [4]

When a parent, like Stacey Brown, is forced to stop working to care for a preterm infant, she often qualifies for Medicaid. Still, Medicaid coverage is only retroactive for three months, which means the hospital claims might not be covered. The federal Children’s Health Insurance Program (CHIP) provides low-cost health coverage to children in families that earn too much money to qualify for Medicaid. In some states, CHIP covers pregnant women.

New families can work with a state or county social worker to see what kind of financial help might be available. Many hospitals offer programs to help families manage out-of-pocket deductibles. A number of community-based organizations and non-profits help NICU families pay nonmedical bills – for example, Uber rides to and from the hospital or childcare for other children.

For employees with high-deductible plans, paying a monthly healthcare premium and then getting hit with thousands of dollars in out-of-pocket costs can feel like having no insurance at all.

For this reason, employers who include a NICU care management benefit in their self-insured plan help manage these risks – not only for their employees, but for the company as well. Since employers are paying a large portion of the bill, companies should seek solutions that lower maternity costs and improve outcomes.

Research shows employees who manage high debts are less productive at work. A study from Fidelity found that employees with the highest levels of debt have twice the absenteeism and miss an additional full week of work compared to employees without such debt. Past-due medical bills were the leading debt-related cause of absenteeism, poor sleep, and reduced productivity. One in eight workers reported struggling with unpaid medical bills. [5]

“Yes, your life is always turned upside down when you have a child,” Stacey Brown told The New York Times regarding her premature triplets. “But with us, in the snap of a finger and a minute-and-a-half we essentially doubled the size of our family and cut our income in half.” [6]

For a growing number of workers, high deductible health plans are the only option – a trend that started a decade ago.

Get our latest Insights

Every month, we're sharing our experience and perspectives on optimizing outcomes for newborns and the families that support them.