NICU Cost Containment in DRG Environments: What ProgenyHealth Sees that Health Plans May Be Missing 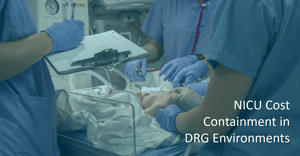 Medical costs for newborns are some of the fastest growing in healthcare - mostly driven by infants requiring NICU services. Such cases represent a small percentage of the newborn population (approx. 15%) but consume a large percent of the total cost of care for this group (>40%). The increasing costs are partially attributed to cases where claims are submitted for the newborn’s NICU admission with a single revenue code level that reflects a higher resource use intensity than is documented in the records for the duration of care, resulting in higher than expected costs to the health plan.

Due to increasing costs, health plans looking for cost containment strategies may negotiate a NICU case rate with providers.  A DRG, or diagnosis-related group, is commonly used to establish the case rate or the reimbursement rate that covers all charges associated with the entirety of the inpatient stay, from the time of admission to discharge. DRGs are chosen because they establish the level of acute care required for the NICU newborn and the resource level determines the reimbursement rate for the provider.

Setting this case rate is a fundamental first step to managing NICU costs. However, to successfully manage the cost of NICU cases in a DRG environment, there are a number of drivers affecting cost that will be specifically discussed in this article. While this discussion focuses on one type of DRG classification, the same considerations apply to health plans using similar and related types of inpatient classification systems to manage NICU care.

DRGs were initially used by Centers for Medicare and Medicaid Services (CMS) for hospital payment for Medicare members. APR DRGs (All Patient Refined) address non-Medicare populations that include pediatric patients and incorporate severity of illness subclasses using the member’s age (in days), weight, severity of illness, and risk of mortality to estimate the resource intensity required for care.

As a result, more health plans (and state Medicaid programs) are using APR DRGs to define and categorize the NICU admission and establish the inpatient reimbursement rate or case rate for the member’s care (physician & specialist fees are not included in the DRG rate). Using the case rate, the health plan will contract with providers for each DRG (28 base DRGs for members less than 29 days old), thereby providing more predictability in a NICU admission’s total cost.

What is an Outlier?

Both parties (health plans & providers) are fully aware that some newborns will require a greater amount of care or a higher level of care than estimated by the DRG. When the care exceeds a specific threshold, this is referred to as an outlier. As a result, oftentimes a health plan and a provider will include an outlier clause in the contract to address these higher cost cases. The outlier clause will typically include the methodology used for identifying outlier cases and the calculation for determining the reimbursement amount.

In the early iterations of DRG payment arrangements, the outlier threshold was typically identified by the length of stay, with additional payments made when the inpatient stay exceeded a defined number of days. Today, in most APR-DRG contracts, the outlier status is triggered when billed charges exceed a specific dollar amount, i.e., outlier threshold.

There are two common scenarios where outliers occur in a DRG environment.

The first scenario is the situation for which the outlier clause in a DRG contract was intended. Scenario two, and how this can be mitigated, is discussed in the section that follows.

The Role of Utilization Management in a DRG Environment

Scenario two – newborns with charges for higher levels of care than are documented or required, as defined by nationally recognized review criteria – is preventable, and a primary reason a health plan should perform utilization management (UM) in a DRG environment. An example illustrating how quickly preventable outliers can occur and the role of utilization management in mitigating these occurrences is detailed below.

A near-term, 37-week gestational age infant is born weighing 3240 grams. Her mother has a prolonged rupture of membranes of 72 hours with a slight fever and increased white count. Due to failure to progress in labor, a C-section is performed. The baby is admitted to the NICU, cultures are drawn, and the infant is started on IV multi-drug antibiotic therapy. She has an uneventful course in the NICU, with no fever or other clinical symptoms of infection. When the culture results are presented at 48 hours, no evidence of a bacterial infection is seen. Because of the negative findings, the antibiotics are discontinued, and, after a 3-day NICU stay, the infant is discharged with the mother following her C-section recovery. The final diagnosis is Suspected Neonatal Sepsis. The level of care is coded as a Level 2 (revenue code 0172) for all three days.

Using the same clinical scenario above, without medical management provided in the NICU, it is likely the hospital would bill the admission as Neonatal Sepsis, assigned to the highest level of care, Level 4 NICU (revenue code 0174). Then on the next day, the member’s bed level is downgraded to Level 3 NICU, but the revenue code remains at Level 4 for the claim and the health plan pays the case rate for the highest levels of care for the admission.

Using the same clinical scenario above, ProgenyHealth’s utilization management team would perform concurrent review of the care provided upon admission, applying the clinical criteria utilized by the health plan, and would appropriately identify the care as an evaluation of suspected sepsis with the authorization of the days at the lower revenue code 172.

Because of the higher revenue codes being billed, the stay in the NICU Case Scenario without utilization management would result in an outlier payment, which may have been prevented.

The table below, Preventable Outlier Scenario for DRG 640-2, details how this case was billed based on the levels of service determined by the facility. Although the difference in allowed amount between the expected and preventable DRG case is $2,820, the difference in the reimbursed amount is $12,455.

The table below, Scenario for DRG 640-2 Under UM Management, shows how the case is likely to be billed based on levels of service authorized through a NICU UM management program using established clinical guidelines. This case was paid, as expected, based on the rate determined in the DRG contract.

This DRG example reviewed a simple case with a short length-of-stay. When you consider that the average length-of-stay for newborns admitted to the NICU is between 5 days and 46 days, depending on the gestational age, the value of a utilization management program and the need for following industry-accepted clinical guidelines for leveling care both become evident. Utilization management of NICU admissions in a DRG environment benefits health plans looking for cost containment strategies.

Scenario for DRG 640-2 Under UM Management

Get our latest NICU Insights

Every month, we're sharing our experience and perspectives on optimizing outcomes for premature and medically complex infant populations.