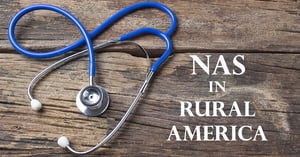 ProgenyHealth is committed to helping providers everywhere with one of the most devastating aspects of the opioid crisis: neonatal abstinence syndrome (NAS). With our newly updated Best Practices for Management of Infants with NAS, our clinical team has addressed major issues affecting these babies and their families.

From 2004-2013, the incidence of NAS and maternal opioid use in the United States increased disproportionately in rural counties from 12.9% in 2003/2004 to 21.2% in 2012/20131. Additionally, maternal opioid use was almost 70% higher in rural areas than in urban areas, reversing the trend from the 1970s, when heroin plagued major cities across the country.

As covered in this article, rural hospitals in states like North Carolina are struggling with a variety of interlocked issues that are contributing to facility closures and compromised patient care. The leaders of seven rural hospitals in that state cited “excessive use of their emergency departments and the uncompensated care resulting from ED patients” as a major problem. Equally alarming, “many said they have a difficult time recruiting medical professionals, and that their counties are turning into doctor deserts.”

With an urgent opioid crisis and declining clinical resources, the impact on the healthcare system is now a perfect storm across the country. Hospital leaders are turning to Medicaid for longer term financial support. But this population faces many complex challenges that mandate immediate, specialized care solutions. Infants born with NAS in rural areas represent a prime example.

According to a recent study conducted by Scott Lorch, MD, and colleagues at Children’s Hospital of Philadelphia2, opiate-exposed infants “had higher 30-day readmission risk from any cause, and this remained elevated through the first year after being discharged.” Compounding the problem, another study cited in a New York Times article found that, compared to urban newborns, rural newborns with NAS are more likely to be from lower-income families, be on Medicaid, and need to be transferred to another hospital for treatment3. Geography now clearly adds a layer of risk to an already vulnerable infant population.

By partnering with providers in rural areas and promoting optimal care through our Best Practices guidelines for NAS, we believe that we can improve the care provided to this population and help facilities effectively manage their scarce resources. Our guidelines were developed by the physicians at ProgenyHealth, which include neonatologists and pediatricians. It was then reviewed and approved by our Medical Advisory Board, a committee of practicing neonatologists from various regions across the US, to assure both scientific accuracy and consistency with up-to-date clinical practice patterns nationwide.