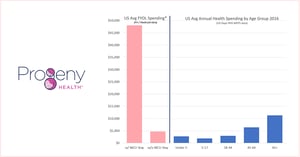 As the Baby Boomer generation ages and many begin to deal with the usual health issues that come with getting older, much attention has been placed on the costs and resource utilization of medical care for this group. Data from CMS shows that approximately 30% of all Medicare spending occurs in the last year of beneficiary’s lives, with much of that spending taking place in the 6 months just prior to death. As shown on the chart Average Health Spending by Age in the United States, published on RegisteredNursing.org, there is a dramatic upward cost trend as people age. For a moment, let’s turn our attention to the opposite end of the spectrum and examine the often overlooked high costs that can arise at the beginning of life.

The good news is that the field of neonatology has experienced great success over the last 40 years.  Before 1980, if a child was born before 24 weeks of gestation, the death rate was nearly 100%.  Even now, infants born with fewer than 22 weeks in the womb are generally considered to be too immature from a lung, nervous system, and heart development perspective to live to hospital discharge. The advent of surfactant therapy in the 1980’s allowed the survival of those infants over 22 weeks of gestation by improving the ability to breathe. Other major advances to improve lung function have been the use of ECMO (extra-corporeal membrane oxygenation), nitric oxide, and prenatal steroids, as well as non-invasive forms of ventilation as alternatives to long term intubation. Evidence-based practice, using the large volume of research in this field, and the development of consensus guidelines to ensure more standard medical care from one hospital to another, have also helped increase survival.

Children born at less than 24 weeks of gestation still have low survival rates at hospital discharge and at 2 years of age.3 Those who do survive very frequently have significant neurological and other developmental disabilities, but those infants who are able to stay in the womb for more than 24 weeks have much higher survival rates and lower rates of disability than was seen just 20 years ago.

However, these successes come with a cost. Premature infants require significant support for breathing and heart rate control, body temperature maintenance, and feeding. Most of these functions aren’t mature enough for an infant to be discharged to  home until the baby reaches the equivalent of what would be 34 to 36 weeks in the womb. As a result, many weeks of a NICU stay, at thousands of dollars a day, are needed to enable a successful transition to the home setting. This cost impact is clearly demonstrated in the chart below, Total Inpatient Costs by Gestational Age, which is based on observed data from unmanaged Medicaid populations that is representative of the US average between January 2016 and August 2018. The average length of stay for this group was 49.9 days. 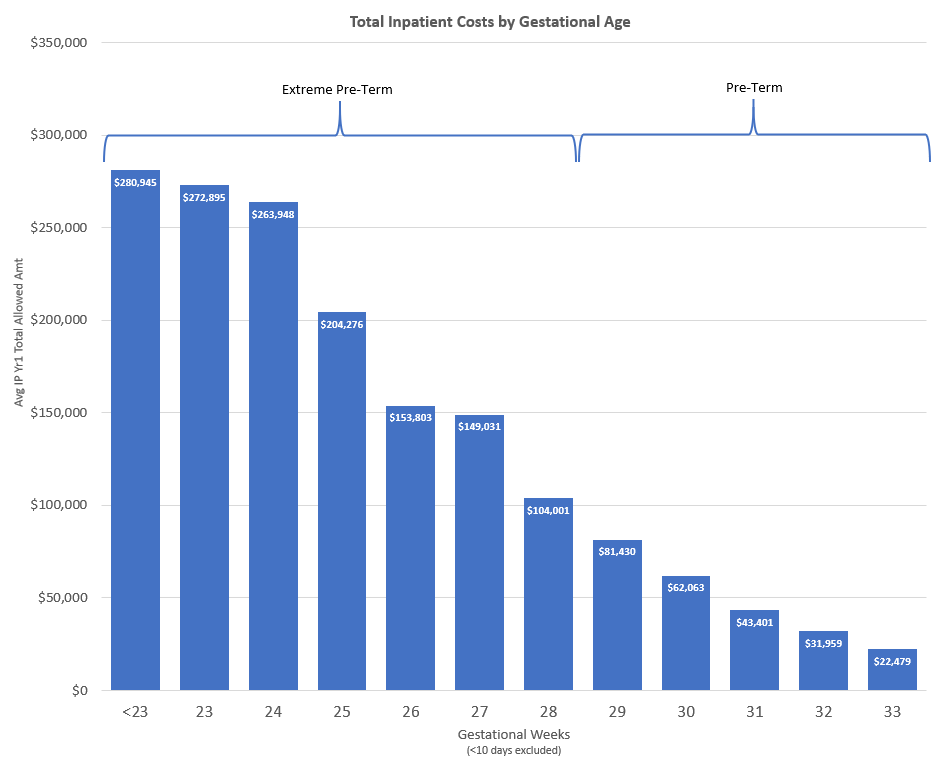 In the chart below, we have combined the data from the prior referenced chart on Average Health Spending by Age with data specific to average first year of life (FYOL) costs for a NICU infant with Medicaid (which can be regarded as a subset of the “Under 5” age group). ProgenyHealth’s data, based on over 5,800 observed and unmanaged cases within Medicaid populations that is representative of the US average, shows an average FYOL insurance “allowed amount” cost of $48,095. (Commercially insured population data indicates this average cost to be substantially higher.) 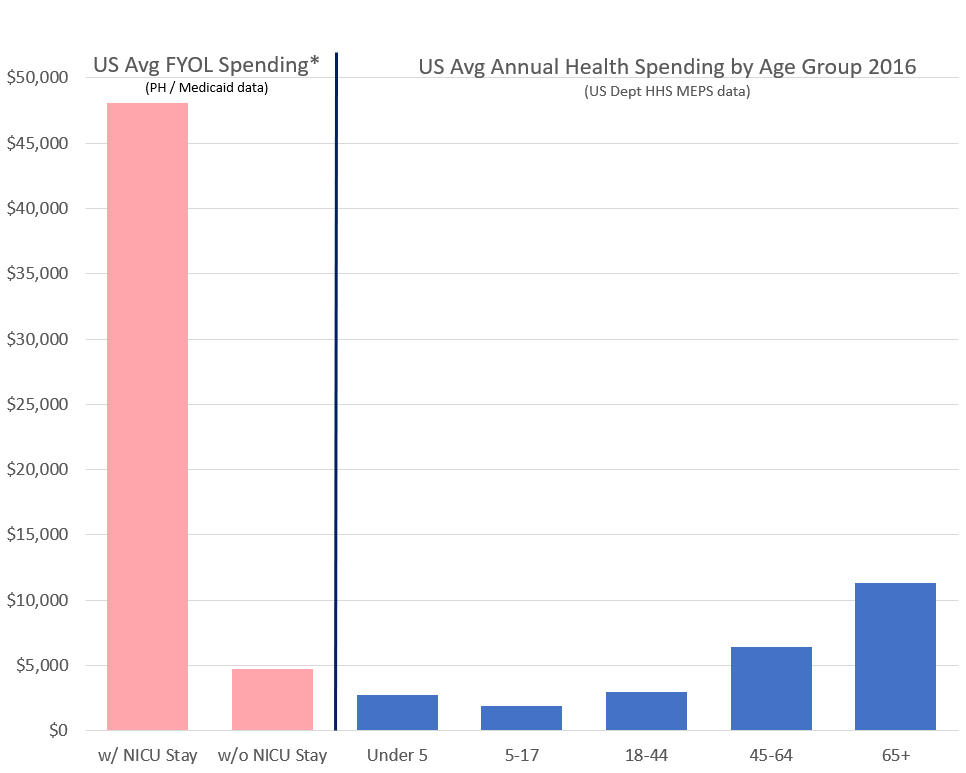 * National average for Medicaid population based on sampled ProgenyHealth data.

While practitioners in American NICUs use state of the art medicine, equipment, and treatment protocols, at ProgenyHealth, based on our clinical staff’s many years of hands-on practice in the NICU, we have found that there are often times during an infant’s stay where the care being provided does not proceed as quickly as would be expected. Health plans have traditionally taken a low-profile approach to handling NICU care, often approving the admission and then asking for updates every 30 days or so. The thought was that these were fairly uncommon admissions and, as a result, the financial risk to the plan was small.  The evaluation of claims data from our clients, however, indicates that the charges associated with these stays often make NICU cases one of the major cost drivers a plan may see during any given year.  In this case, low volume definitely does not mean low financial risk.

For health plans, an effective strategy is to partner with clinical experts who deal only with the NICU population, have a proven track record of effective management of these infants (with reductions in length of stay, readmissions, and emergency room visits), minimize provider abrasion, and help increase member satisfaction scores. ProgenyHealth can meet all of these needs, and more, as an integrated team of utilization management and case management nurses, working with Board-certified Neonatologists and Pediatric Intensivists, who are on top of current clinical advances.

We welcome the opportunity to work with your plan to advance the great work that has taken place in the field of neonatal medicine and provide your NICU population with the best clinical outcomes possible to ensure the most efficient and effective use of health care resources possible.

Accredited:
NCQA Utilization Management
Accredited:
NCQA Case Management
Health Utilization Management
Expires 09/01/2025
DISCLAIMER: ProgenyHealth, LLC is a utilization review entity performing utilization review and case management services on behalf of health plan and other channel partners, which produce population health and cost containment outcomes.  Our Medical Directors do not engage in the practice of medicine or the delivery of any related care; our Case Managers perform telephonic services as an extension of our health plan, and other channel, partners’ services