National Prematurity Awareness Month: Celebrating Successes from a Few of Our Own 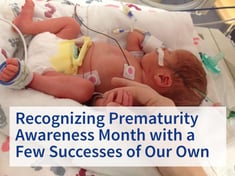 November is National Prematurity Awareness Month – a time to recognize the 1 in 10 babies who are born preterm – nearly 400,000 babies each year in the United States.

Even though premature babies miss out on some of the growth and development that happens in the final weeks of gestation, advances in medical science and care support increase the odds that they will live full, productive, and healthy lives.

For parents of babies who started their lives in the NICU, it’s hard to appreciate the rollercoaster of emotions that NICU families endure. Jim Clarke, Vice President of Information Technology & Informatics at ProgenyHealth and a three-time NICU father, described his first moments with his child:

“When you are able to visit and hold your baby for the first time, that unforgettable moment might be different than you expect. You will likely see incubators, wires, and other equipment surrounding your baby that may look scary, but are standard components in NICU care. With Emily starting life in the NICU, my first time holding her was a month after her birthday.”

Prematurity Awareness Month offers some good news and bad: The national rate of preterm birth declined 8 percent between 2007 and 2014 – mostly from the decline in teen pregnancies.1 This trend may be shifting. The preterm birth rate in the United States worsened for a fourth year, from 9.63 percent in 2015 to 10.02 percent in 2018. The average cost of preterm birth continues to rise, currently $65,000.2

More sobering are the ethnic and racial disparities of preterm birth: In 2015, the rate of preterm birth among African American women (13.4 percent) was about 50 percent higher than for white women (8.9 percent).

We may never fully understand why some babies are born too soon. Any woman, even those who do everything “right,” can deliver too early. As a result, when a baby is born prematurely, parents often feel shocked, confused, or numb. Some feel grief and fear from an enormous unknown.

Moms and babies face higher risks than ever before. Study the March of Dimes Preterm Birth Report Card to learn about your state’s progress in lowering the preterm rate. If your state has not adopted Medicaid expansion, contact your elected officials. Studies indicate that reducing uninsured rates for child-bearing age women reduces health disparities, including lower rates of premature birth and low birthweight. Other proactive steps governments can take include extending Medicaid coverage to a year of postpartum, enhancing prenatal care benefits, and addressing the social determinants of health.

Elysia Tomlinson, ProgenyHealth’s General Counsel, reminds us why Prematurity Awareness Month demands our attention. After a healthy pregnancy, Elysia’s daughter, Quinn, was born at thirty-four weeks weighing only 4lbs. She spent her first 17 days in the NICU. Once home, gaining weight was a challenge, but you wouldn’t know it if you met Quinn today. Elysia shared:

“Today, Quinn is an outgoing, precocious, smart little girl. At 2 ½, we started her in dance and gymnastics to promote core strength, and by 5 years old, she was invited to join the competitive gymnastics team. Now, at 7, she’s a competitive cheerleader, hand springing and flying all over the mat, and you’d never know, but for her petite size, what a struggle her first few months were!

“This is why I love what I do at ProgenyHealth – and why I do my part to ensure fellow NICU families are provided with the support they need to reach that first and most important “graduation day” from the NICU, make their transition home easier, and keep their babies healthy.”

Accredited:
NCQA Utilization Management
Accredited:
NCQA Case Management
Health Utilization Management
Expires 09/01/2025
DISCLAIMER: ProgenyHealth, LLC is a utilization review entity performing utilization review and case management services on behalf of health plan and other channel partners, which produce population health and cost containment outcomes.  Our Medical Directors do not engage in the practice of medicine or the delivery of any related care; our Case Managers perform telephonic services as an extension of our health plan, and other channel, partners’ services